Happy book birthday to The Trouble with Werewolves! For a short story, it certainly took me a long time to get this one out into the world.  I think a lot of the reasoning was because I wasn’t completely done with the series and wanted to hold off. I’m still not done (the 3rd book is nearing completion but has a ways to go yet) but I figured if I published then it would push me to get it done.

I really enjoyed writing this story, I think because Ellie’s a tough chick but with a definitely vulnerable side to her. She’s had an interesting upbringing but still wanted to be “normal”. Like most teens, she is trying to find herself, love, and a great pair of jeans to highlight her ass…ets.

I hope you enjoy her antics as much as I enjoyed writing about them! 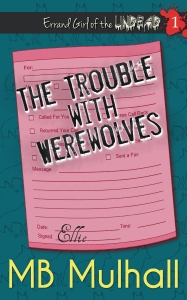 Ellie Weston may look like a blonde Barbie wanna-be, but call by her full name of Elvira and you’ll find she can take you down with nothing more than a paperclip and a hair tie. Having been raised by an ancient vampire, a faerie and a demon hardly makes her a normal teen. She’s trained in self-defense, with a bit of magic thrown in, but those talents are going to waste as she picks up dry cleaning, walks three-headed dogs and collects grave dust by the light of the full moon.

Her job as an errand girl to the undead–and other paranormal creatures–has kept her busy and relatively safe, until she receives a job to hunt down a rogue werewolf who is brutally butchering norms in her father’s territory. As she tries to track down the bloodthirsty beast, she finds the clues aren’t quite adding up. Will her wiles be enough to keep her safe and solve the mystery, or will she become the next victim of these ghastly crimes?

When a book is banned and not allowed in schools or even the library, it can make the avid reader even more eager to hunt down a copy for themselves to see what all the hype is about. In this day and age, it’s very easy for many to get their hands on those books, whether it’s e-books that can be borrowed

or purchased online or physical copies that can be picked up at the local book store.   Personally, there was only one book my mother forbid me to read, Flowers in the Attic. I found a copy for 10 cents at a yard sale (sans the cover…) which I picked up and read without my folks ever knowing.  At the time, I didn’t see what the big deal was. Sure there was some adult themes: incest, murder, etc.but I understood it was just fiction and not a real story. As an adult I can see why my mother found it so awful. How could a mother, fictional or not, do such an awful thing to her kids?

Adults can see topics in a different light than someone who is younger. While they might see Harry Potter as promoting witchcraft, a teen reader sees a coming of age, fantastical story that just happens to include some cool magic stuff. While they might wish they could be like Harry, I doubt they’re running out looking for their own owls and books on how to become a wizard.

I do think it’s important to know what your kids are reading and if the themes are currently too mature for them, but to broadly ban books is only going to push the avid reader to find some way to get their hands on it. In the day and age of internet, video games and phones that do just about anything, be happy your child/teen is still picking up books and wants to throw themselves into worlds they have to imagine on their own.

What are your thoughts on banned books?

Everyone can write, if they triy, but that doesn’t

necessarily mean it’s going to be good, something that others will enjoy reading. There are plenty of ways to improve, from daily writing and using prompts to listening to constructive criticism and being willing to edit.

I firmly stand behind the idea that one needs to read in order to write well and I’m not just talking “How To” books, although those are helpful too. I can’t tell you how many pieces of writing I’ve seen in crit groups that don’t have proper dialog, thought or flashback formatting, that have stilted dialog with outdated or too old for the character vocabulary, that don’t know how to keep the plot flowing or how to build the tension to the climax.

Reading books in the genre in which you write can be helpful to teach you how to handle formatting and how to better build a world or well rounded characters.  Not only will reading help your writing, but it will show you what’s trending in your genre at the moment and the kinds of topics publishers are picking up (although that’s not to say you need to follow the trend because by the time you publish, the trend could have changed.)

I’d have to say I’m not sure I’d trust someone who claimed to be a writer and then told me they don’t read. To me that would signify that the person was more a hobbyist who writes for fun but isn’t really looking to improve upon themselves to hone their craft. There’s nothing wrong with that if they’re just writing for enjoyment, but if they’re looking to publish, gently point them in the direction of your local library and tell them to get readin’!

Do you think reading is an important aspect to writing? Why or why not?

Writing  a novel is much like putting together a giant jigsaw puzzle. You’ve got lots of pieces laying around, whether they’re in an outline, written free form scribbled on a napkin or just floating around in your brain.  You might start with an idea, or just a character. Maybe you only know you want to write something with a specific theme. Those little pieces have to come together to build the big picture that is your story.

When working on a puzzle we think may a piece fits somewhere but at second glance,  it seems a bit off. The color might work but maybe the fit isn’t tight.  You wouldn’t throw that puzzle piece away, would you? No! Without it you won’t have a complete image. Sometimes in the editing process we find better places for those pieces. Places where they fit snuggly and help make the clearest image for your reader.

When I was writing Heavyweight I originally had the story start differently. It wasn’t until I read it at a writing seminar that it was suggested to me that I change where the beginning started. I was able to rearrange things without cutting out what I thought was important information and it made the story much stronger. I really think it had a lot to do with selling my book to my publisher.

Yes there will be appropriate times to cut out information. We tend to add a lot of extras (especially in our early days of writing) that aren’t really necessary and will most likely slow down the flow of the story, but many times you will have beautifully penned prose that you can’t bear to lose. Most likely, with some rearranging of the pieces in editing, you can find the appropriate place for that section.

Don’t be afraid to move things around. If the beginning seems slow because you’re front loading the world building, break it up and add it as the story goes. You want to engage and hook the reader, not have them flipping ahead to see when the “real” story starts. Move those story pieces until you get the picture completed, each part fitting tightly with its neighboring parts, creating a seamless story.

When editing, do you just cut big parts or do you try to find new places in your story for them?

The cases of someone gaining instantaneous fame and success are far and few between. If you’re just sitting back on your laurels 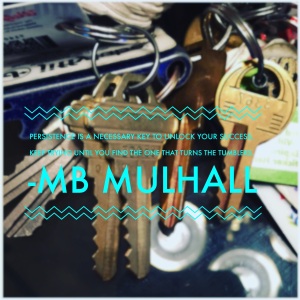 awaiting for stardom to come knocking on your door, you’re probably going be waiting there a loooong, long time. The “Greats” in any field have likely been knocked down, rejected, laughed at, spit on, etc. before they gained a solid foothold and made a decent name for themselves.

Having a successful career as a writer is no different (and we’ve discussed different forms of success in the past, so I won’t get into that aspect at the moment.) A quick Google search can have you finding how many times your favorite authors were rejected before they had a book picked up and published.

Scrolling through social media will have you seeing book deal announcements and others having self-publishing success. It can be disheartening, but you are not alone and that’s no reason to throw in the metaphoric towel. Many people who don’t write think it’s an easy task. How many of us have had a conversation similar to this?

Them: “Oh! You’re a writer? I could do that…I’ve got this idea that would definitely be the next great American novel, ya know? I could totally do it, if I just had the time.”

It’s a long journey with peril of rejection at every turn. But is it worth it to hold that printed book in your hands? Most definitely. If the first key doesn’t turn the tumblers, be persistent and keep trying until you find the one that will unlock your success. Your work is worth the commitment.

How do you stay persistent in your publishing journey?

Tears of a Clown

Read a snippet of Heavyweight!

Take a glimpse into the life of an Indie Writer

15 second videos from a writer's POV

How many came to visit

Other blogs & links for Indie Authors